What started out as a casual hobby for visual artist Aifheli Muntswu has developed into full-blown passion. Not only does he use his artistic skills to express himself, but it has also grown into a dream career for him.

For this 19-year-old, self-taught artist of Tshidzini village, everything started at the tender age of four years, when he would sit and draw pictures for hours at a time. Later, he began sketching anything that caught his eye, and his passion for art kept on growing.

Aifheli’s drawing style is mainly inspired by his surroundings. “The feeling I get from my artwork is something I can’t describe. The imagination, together with the effort I put into my work, later inspired me to also start painting in colour,” he says.

About five years ago, he started designing vibrantly painted T-shirts, sneakers, jean jackets and trousers, which he does on commission. Aifheli works with a variety of mediums, but for his T-shirts, he uses a pencil, pen and acrylic fabric paint. “I first do the drawings with a pen or pencil before I start filling in the design with paint,” he explains.

He says that his drawing skill has a lot to do with a close friend of his. “My friend, Ritshidze Ralukake, and I used to compete with each other, designing T-shirts, and this played a vital role in sharpening my skills. He still assists me with some of my commissions for clients,” Aifheli says.

According to him, art has the ability to stimulate people’s emotions, make them more attentive and open their minds. “My art allows me to be impartial. It shows me the meaning of life and helps me to better understand the world. It always opens my mind to new ideas. My desire is to be an art teacher one day,” Aifheli says.

The versatile young artist, who is currently upgrading his Grade 12 results at Milton Mpfumedzeni High School, so that he can further his studies, also volunteers to paint the walls of the kindergartens in his home village, so that the little ones are cheered by the shapes and colours.

Those who are interested in Aifheli’s art can order directly from him by phoning or texting him on 076 404 7460 (WhatsApp). 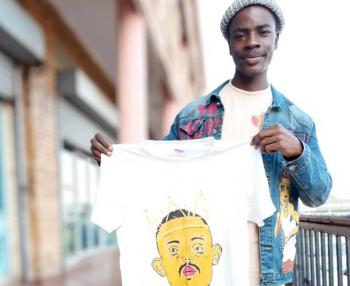 Thembi Siaga worked as an intern during 2021. He assisted with video photography and editing. He also produced numerous small documentaries, focusing on the Vhembe region and its people.