Various grievances from members of the Vhembe Pastor’s Forum were discussed during a meeting with executive mayor Florence Radzilani in Thohoyandou last Wednesday.

The meeting was arranged to give pastors an opportunity to air their grievances with the executive mayor's office.

Before they could give their presentation, Radzilani expressed her dissatisfaction about some of the pastors who talked negatively about political leaders whenever they were given platforms to speak to people during events.

The forum, which was led by Dean Alunamutwe Randitsheni, then gave through a written presentation and said that that they were unfairly treated whenever they applied for church stands in Vhembe.

The pastors said they were charged different tariffs, some of which were very high.  They said each municipality used its own rate. Such rates, they said, were very different even though the application was the same.

The pastors' concern is that a traditional leader will charge his or her own fee, before a municipality charges its own fee. “Our challenge is that some municipalities charge us six times more than what their compatriot will charge us for a similar application. We find this very challenging. Our request to you, Executive Mayor, is to help us get a flat rate in all four the municipalities,” the pastors pleaded.

Another other challenge was that some municipalities demanded that enough parking space should be available at the church before the plan could be approved. According to the pastors, some municipalities, such asThulamela, demanded that if a church had a capacity of 1 000, the parking bays also had to correspond, otherwise the plan would not be approved.

Their concern was that businesspeople were not given the same treatment.  Their argument was that most of the church members did not own cars, especially those in rural area. “Most of our churches are in rural areas, so the majority our members are pedestrians.  We do not understand why we are forced to have more space for parking in such circumstances,” said the pastors.

The pastors also raised their concerns about continuous strikes at the University of Venda.  Randitsheni said the trend must stop to avoid the degrading of Univen’s status, which might lead to lower funding by the government. “If we allow these strike actions to continue, soon there will be job losses.  As times goes on, the university might end up closing and our children will have to travel far for tertiary education,” warned Randitsheni.

In her response, Radzilani, who was assigned the task to open dialogue with the university, said she was equally concerned about the issue, which affected the youth who were future leaders.

Cllr Mavhungu Luruli, portfolio head of development and planning, said that they were going to involve the pastors in the committee that dealt with their concerns. She also said different municipalities charged different rates because of their different status.

Further engagements were going to be made to find solutions to the pastors’ grievances, said Luruli. 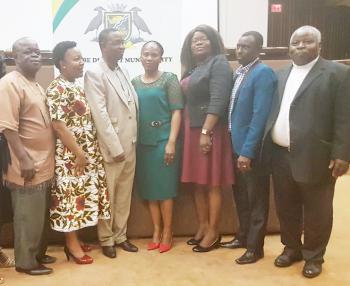