Numerous mourners, including many Zion Christian Church members, marched from a house in Mauluma to the Madombidzha graveyard, where taxi owner Phineus Mauluma was laid to rest on Sunday.

He died at the age of 73 after a long illness in the Louis Trichardt Memorial Hospital two weeks ago.

During the funeral, Mauluma was described as a pioneer, a born leader and a man of vision. Many speakers expressed their condolences to the Mauluma family and said that Phineus had been a hard worker. His son, Mr Clifford Mauluma, said it was hard to accept the death of his father. "Our hearts are bleeding as we lost a pillar in our community. We depended on him for advice and we learnt a lot from him during his lifetime."

He said that his father had been a very solemn, restrained and dignified man. “For many years, he served selflessly and faithfully in parishes throughout the country, and he made himself available day and night to all who needed him,” he added.

The chairperson of the Makhado Long-Distance Taxi Association (Malta), Mr Mathaka Maliaga, said that his association was saddened by the death of one of their own. He said the grief that the family was experiencing “also touches us and we will always remember him, because he had done so many good things for this taxi industry and community”. 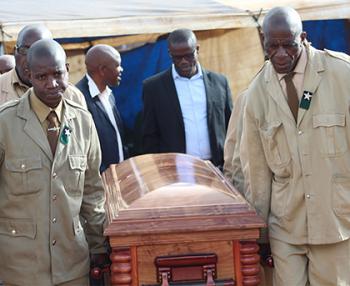 Members of the Zion Christian Church carry the coffin of the late Phineus Mauluma.