No room at Makuya court

Hundreds of angry residents from Tshitavha and surrounding villages who had come to attend a ritual murder case were left disappointed as they could not be accommodated in the small court room.

This was during the appearance of the six accused in the ritual murder case of Ms Mercy Ndou. Ndou was ruthlessly murdered in 2014 and her body parts were harvested.

The Makuya Periodical Court can only accommodate about 30 people and court officials struggled to control the huge crowds that wanted to be allowed into the court. This led to a late start of the court proceedings. Only close family members were allowed to attend.

The accused, who were under heavy police guard, finally appeared in court. In a short sitting, the State indicated that it was not ready to proceed with the formal bail application as it still sought certain evidence in connection with the case and one remaining suspect still had to be arrested.

The defence argued that the State had advanced the same reasons when seeking a postponement last week. After some deliberations, the court ruled in favour of the State, saying it had advanced valid reasons for more time. The date of  9 May 2018 was given as a final postponement on which the formal bail application should be heard.

Ndou, originally from Shayandima, disappeared in 2014 after telling her family she was visiting friends and that she would come back later to assist them in moving goods as they were moving to a new house at another location. That was the last time she was seen alive. Her body, with parts missing, was found in the bushes at Tshitavha.

A traditional healer, Vusiwana Baloyi, was arrested and later sentenced to life imprisonment for the crime. During his trial in 2016, Baloyi mentioned the names of the people who had participated in the killing. The police took almost two years to act on the information, and only three weeks ago they made a major breakthrough and arrested the six.

The six, two females and four males, made their first appearance in the Thohoyandou Magistrate’s Court a fortnight ago and their case was initially postponed to last Wednesday for the bail applications.

On Wednesday, hundreds of angry community members gathered at the court premises, hoping to gain entry to the court to get a glimpse of the accused. As they could not all be allowed in court, they peeped through windows, some even insulting the suspects, telling them they would not be released and that they would rot in jail. Some were urging the police to release them, so that they could be dealt with by the mob.

“We are tired of ritual murders in this area, and we know that there are still others roaming the streets. We are just happy that even those who were being protected are now behind bars and our prayer is that they be punished for their heinous crimes. They should be locked in jail forever,” said a resident who did not want to be identified.

The Reverend Jabulane Monegi, the Ndou family’s spokesperson, said the postponement suited them well. “We have faith in the justice system, and the fact that they are in custody gives us hope that the wheels of justice will move at their own speed and justice will be served at the end of the day,” he said. 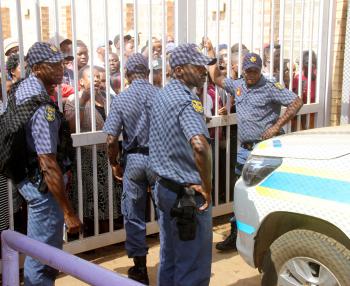 The police controlled the big crowd that had gathered outside the court.

Some of the accused entering the Makuya Periodical Court on Wednesday.

Part of the huge crowd that had gathered at the court premises, waiting for an opportunity to see the accused.