The fire season is once again back with us - this is that time of the year when many lose their properties and hectares of field are burnt because of fires.

The Vhembe District, with its dense forests, keeps firefighters on their toes at this time. At the same time, firefighters are kept busy with campaigns to inform communities about the effects of fire and how to curb it.

The Ramushwana Fire Station at Muledane in Thohoyandou is also hard at work. A senior divisional officer at the fire station, Mr Fulufhelo Sibara, has called on communities to help them in the fight against fires. Speaking during an awareness campaign and firefighting display at Makhuvha, Sibara said the fire season that started in August and continued to March was the most problematic.

He said veld fires were mostly caused by farmers clearing bushes and fires got out of hand, thus burning vast areas. He further said that bees’ harvesters were partly to blame for the rampant fires in the bushes as they sometimes ran away after being stung by bees, leaving the fire to spread uncontrolled. “We also have problems with smokers who throw away burning cigarettes, which in turn start fires.”

Sibara further indicated that parents should share the blame for fires at their homes because they allowed their children to play with matches. He urged smokers not to smoke while in bed as they could fall asleep and burn down the whole house.

He also cautioned against leaving electric utensils on, as this could also lead to fires. "We are ready for this season, and part of our strategy is community engagement through awareness campaigns at churches, traditional council meetings and everywhere where we can find an audience.” He added that they had school safety teams, where they trained some of the learners  in skills to fight fires.

“Fighting of fires is a collective; we all have a part to play in this fight for a safer environment," said Sibara. He urged churches, traditional councils and other organized formations to invite them to come and inform their members. 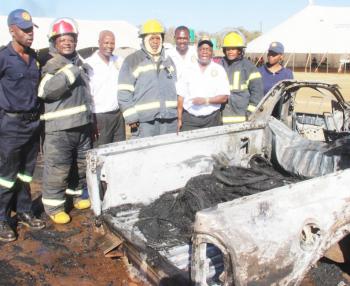 Firefighters from Ramushwana Fire Station during a fire demonstration at Makhuvha outside Thohoyandou.