Makhado Council wants to grab the land of sport clubs

The Makhado Municipality notified 11 amateur sport clubs in Louis Trichardt last week that it intends to cancel their lease agreements and take over their facilities. Council does not appear to have any plans in place at this stage on how to manage the facilities, promote the sporting codes or even absorb the additional expenses, should it succeed in ousting the sport clubs.

The plans to strip the sports clubs of their assets have been simmering for more than two years. In March 2019, an item served before Council where councillors had to approve the expense of getting a legal opinion on how to terminate the lease contracts of the town’s sports clubs. At the time, the motivation for this decision was formulated by Council as such:

“The whites-only predecessor of the Makhado Municipality, Louis Trichardt Local Authority, has during the period 1993, 1994 and 1995, just at the dawn of the new constitutional dispensation, concluded 99-year lease agreements with the whites-only sporting clubs. Ever since the establishment of the Makhado Local Municipality, Council has questioned these dubious decisions by the former Louis Trichardt Council as it smells [of] racial discrimination.”

Council’s legal team, Munonde Attorneys & Conveyancers, investigated the matter and advised that the municipality had two options, should they want to terminate the contracts. Firstly, they could cancel the agreements if the lessee had failed to comply with any of the conditions of the contract. Secondly, the contract could be terminated if the municipality could supply sound reasons to do so. The Makhado Municipality opted for the latter option, that of “sound reasons”, as Munonde Attorneys & Conveyancers had already indicated in their legal opinion that they could find nothing in the agreements that could constitute a breach of contract.

During a Council meeting held on 31 May this year, the plans were set in motion to try and void the lease agreements. The motivation for cancelling the agreements was because “these agreements contravene public policy”. In a report compiled by a sub-committee of Council, the leases are described as “a tool ensuring that the dream of a democratic South Africa must never become a reality”.

Letters spelling out the terms under which Council intends to cancel the lease agreements were hand-delivered to representatives of the various sports clubs last week.

Council got it completely wrong

When word got out of Council’s intention a few weeks ago, a meeting was arranged where representatives of the sports clubs voiced their concerns over the latest plans. The decision to cancel lease agreements with all the town’s sporting bodies was described as short-sighted, ill-informed, and insulting to the decades-long development projects of several of the sporting codes.

The sport clubs unanimously decided to contest Council’s plans. The clubs indicated that they would fight the decision in their own capacity, as well as combined, should this be necessary.

The fact that Council considers all sport clubs in town as being “similar” and subject to the same “retribution” mechanism, was criticized. The clubs all have a unique history and are affiliated to the various sports’ regulatory bodies. These sporting bodies regulate everything from the competitions run and participated in by the clubs to the development and transformation programmes. The various sporting codes also prescribe that clubs should be non-racial and cater for all residents, irrespective of race or religion.

For the interim, the clubs opted to form a combined committee, headed up by Andy Leach, who is from the Louis Trichardt Tennis Club. A local attorney, Dr Suwil Rudolph, is willing to handle the case, should it go to court, at a minimal fee. He also serves as the spokesperson for the clubs.

Dr Rudolph said that the state of affairs was sad when Council chose to engage in such senseless racist battles instead of focusing on service delivery. In a response earlier this week, he said that the logic of Council’s arguments in the letters sent to the clubs were flawed. Council seems to believe that all lease agreements were concluded at the same time, which is not correct. Clubs such as the Louis Trichardt Rugby Club had their contract renewed some three years ago.

The absurdity of the Makhado Municipality’s decision to have a blanket cancellation of lease agreements is quite evident when looking at the history of the Louis Trichardt Cricket Club. This is another of the clubs targeted by the Council.

Prior to 1994, no official cricket field existed in town, apart from fields at the schools. A group of cricket enthusiasts formed a club, but only in 1994 were they allowed to play at a field at the show grounds. Ironically, the club fought for an own field because the school-governing bodies at the time were not keen on allowing players of colour to utilise their facilities. The club, at that stage, had many players of colour and even the first honorary member was a player of colour.

A new lease agreement was subsequently signed, which stipulated that the club could lease the field for a period of 99 years, at a starting rental of R50 per year, which would escalate annually. The mayor at the time was Cllr Patrick Sikhutshi.

We are not making money out of the clubs

In the letters delivered to the sport clubs, Council states that “the rental payable by the lessee is not market related … in relation to the value of the property leased”. It also states that the lease agreements “did not promote the objects of the local government in general and that of Makhado Local Municipality in terms of Section 152 of the Constitution”.

Ironically, this section of the Constitution spells out what local government should be doing, which includes ensuring the provision of services to communities in a sustainable manner. Section 152 requires municipalities to promote social and economic development and to encourage the involvement of communities and community organisations in matters of local government.

Council also seems to have no plan in place to either maintain or develop the sports clubs, should they take over these facilities. Council’s spokesperson, Mr Louis Bobodi, said that Council had no intention of concluding new lease agreements with the clubs.

Council, however, has not budgeted for any of these expenses and seems to have no immediate plans in place. “Council is yet to discuss (this) with the lessees,” is all that Bobodi said on the matter. Fact is, however, that this could run into several millions of rands. Clubs such as the squash club, the tennis club and the rugby club have buildings and specialised courts that took many years to establish. In the majority of cases, the funding for the infrastructure did not come from the municipality or government but was sourced from the club’s members.

This is simply race-baiting

When word got out of Council’s intentions to cancel lease agreements based on an assumption of exclusivity, the move was described as race-baiting by some of the club representatives. Race-baiting is when people or organisations try and incite racial hatred, mostly for political purposes.

Fingers were pointed at one of the members of the executive council, who was the self-proclaimed driving force behind the decision to cancel the lease agreements, Cllr Anthony Matumba. In a posting on his Facebook page shortly after the decision was taken, Matumba states that a certain “white family” controls facilities such as the rugby stadium.

“As EFF we fought daily for this contract to be terminated. Today I am happy to announce that our Rugby Stadium is coming back to the hands of the people. No more permission from that White family. This include Golf Club, Cricket Club and others. We are taking all of them from White Family back to full control of the Municipality.”

Exactly who the “white family” may be that Matumba was referring to remains unclear. The sport clubs are all managed by committees whose representatives are elected from the active members of the club. The clubs are all required to conduct their business in accordance with their constitutions, which must be on file at the municipality.

Councillor Matumba, however, is still being investigated by the SA Human Rights Commission after mainstream media reported that he was the face behind a social media profile that indulged in race-baiting exercises. Council’s own Ethics Committee was tasked to investigate the conduct of Cllr Matumba, who allegedly used a Twitter profile, @TracyZille, to promote racial stereotyping and hatred.

Matumba denied to the newspaper at the time that he was involved in these practices. During the 159th Council Meeting (the same meeting where the decision to cancel the lease agreements was approved), Council resolved that the matter against Matumba be provisionally withdrawn “because the matter is still under investigation”.

Council’s spokesperson also vehemently denied that Council is taking part in such practices. “No, it's not race-baiting and doesn't stem from a councillor who is being investigated. Council is not participating in any human-rights infringements whatsoever,” said Bobodi.

No, we did not consult with anyone

One of the questions posed to Council was whether any consultations with the clubs or the sports’ controlling bodies had taken place prior to Council’s decision to cancel the lease agreements. Bobodi responded by saying that none had taken place, but that Council was yet to enter into discussion with the lessees.

Bobodi confirmed that Council has not raised any issues such as a possible lack of transformation with any of the sports’ controlling bodies over the past two decades.

Bobodi also responded to another point of critique, namely that Council intends to sell off some of the properties once it succeeds in cancelling the lease agreements.

The Makhado Municipality has made the headlines over the past few years because of very dubious property transactions. In one such case, Council opted to dispose of one of the few remaining public parks in town. The park was sold by public auction, but strangely enough, one section of the park was sold off to the lowest bidder and not the highest bidder. The buyer subsequently resold it a year later for a R1 million profit. Council refused to divulge reasons why it had refused the higher offers and even ignored PAIA requests for more information on the matter.

Representatives of some sports clubs expressed the fear that Council’s latest move is nothing more than an attempt to get hold of more public land to sell off in dubious transactions. Bobodi responded by saying that this is not true. “Council is not intending to sell any of its sporting facilities,” he said.

The matter may drag on for much longer than the six months Council has given clubs to respond. Dr Rudolph reckons the matter may very well end up in court, but this can be a lengthy exercise. Because of the lack of proper reasons supplied for cancelling the agreements and because of all the inconsistencies, Council will probably have to ask a court to try and enforce their wish. This will be contested by the clubs.

As usual, the taxpayer will foot the bill on Council’s behalf. 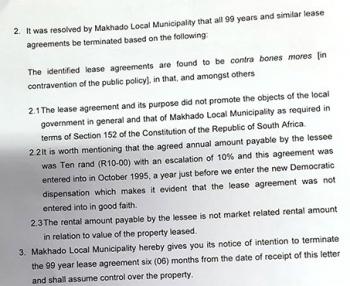 An extract of the notice the Makhado Municipality send to 11 amateur sport clubs last week.