It may be a man's job, but it puts food on her table

When you are stripped of your only source of income, you have to come up with new plans and ideas in order to eat, and being particular or proud is not an option. Like many others whose lives had been shattered by the effects of the Covid-19 pandemic, Thilivhali Muledane too was forced out of business, and like many others, this lovely lady came up with an alternative way to defy poverty, by making mudbricks.

The 29-year-old mother of two from Vyeboom in Vuwani used to sell food to learners at a local school, and thus was able to put food on the table. Then the pandemic struck, and she was forced out of business. At the same time, her husband’s mudbrick-making business came crumbling down, leaving the family with no income and in a state of utter despair.

“We were suffering as a family and our lives seemed to have reached a cul-de-sac. We were trying to figure out how to come by without money to buy the necessities like bread, sugar and other stuff. This troubled me a lot,” she said. “And then, one day, at the beginning of this year while I was sitting at home, the idea to reopen my husband’s brick-making business came to me. I believed it was the answer. My husband did not believe me, but I was determined to turn things around.”

So, Muledane took over her husband’s mudbrick-making business. “A few months down the line, three boys from the village came looking for a job. I gave them space, but I continued to do the work myself,” she said and proudly announced that she can mould more than 500 bricks a day by herself!

“Sometimes my husband helps with mixing the soil, which makes the moulding easier for me and also saves some time.”

Mixing the soil, she says, is the biggest challenge in the brick-making business if you do not have mixing machines, but Muledane is up for this challenge and has no intention of ever doing anything else than making bricks for as long as she lives. “Even if it takes me years of hard work to get machines to make things easier, I won’t stop because jobs are scarce in this country,” she said.

Her bricks are sold to nearby communities and the money she makes from doing so enables her to take care of her family. “I had to swallow my pride and take this menial job that is despised by many. One thing I have learned is that no job is better than the other. I hate hunger and begging, and that is why I will accept any job as long as I can make money from it,” Muledane said.

Her advice to other women is to stand up and create jobs for themselves. “Do whatever you have to do. Money is the same; no one will ask you whether you got it from making bricks. After I’ve made money from my business, I put some makeup on and make myself look beautiful and go to town to do shopping,” she said. 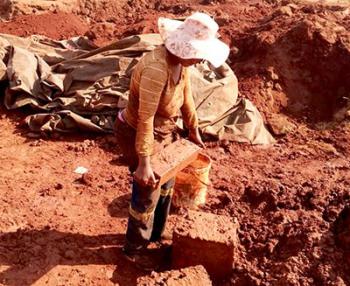 Thilivhali Muledane from Vyeboom in Vuwani has started her own mudbrick-making business, and with the income she generates from it, she is able to provide for her family. Photo supplied.