The Vhembe region boasts one of the most beautiful and valuable trees - the Mopani - but experts warn that if people do not start to protect it from the hands of careless woodcutters, it will lead to dire consequences for the indigenous birds and animals of the area.

Of late, the Niani area has seen an influx of invaders from far and near who go there with no better intention than to cut these treasured trees for firewood. Because of this, the tree, which is a major food source for the protein-rich Mopani worm (which most African tribes rely on for food), might soon go extinct, ultimately leading to a lack of resources to make its inhabitants self-sufficient.

Mr Adam Mulaudzi, a resident in the area, realises how dependent the people are on the Mopani tree. He said they became concerned when they saw the destruction around them, and at such a fast pace. “Things were fine when people only took the dead trees for firewood. It was regulated, not what we are witnessing today. These trees used to be our gold mine, with the elderly people harvesting many kilogrammes of the Mopani worms on an annual basis. They would later sell them and improve their living conditions from the proceeds of their sales, but today we see big trucks, fully loaded with wood, emerging from the bushes. Sooner or later this has to stop. We must all take part in preserving our environment for the future generations,” he said.

Another community member, Mr Eric Mandiwana, said no more control and order existed in the village. “Our environment is being stripped bare under our watch. The previous government had stricter laws that ensured the environment stayed intact, but all this has changed, and people do as they please. That is the reason we are experiencing such severe changes in our climate. Our plea to the government is that they deploy environmentalists to enforce the law in this area. There are so many unemployed young people here who can perform the task of controlling woodcutting,” he said.

Mr Zaid Kalla, spokesperson of the Limpopo Department of Economic Development, Environment and Tourism, reminded residents of the importance of the environment and that communities should be actively involved in its safekeeping. “It should be remembered that plants and trees play a very critical role in the management of climate change and the environment in general. Without plants and trees, there would be dire consequences as witnessed in other parts of the country (like the recent floods in KwaZulu-Natal). This could also lead to serious soil erosion, to the detriment of the community,” he said.

“It should be taken into consideration that cutting trees without a permit is illegal. As a department, we are doing all we can to arrest this scourge. We are on constant patrols in the area, and this has helped subside the rampant sale of firewood in the area, but we still call on communities to be actively involved in safeguarding their environment,” he said. 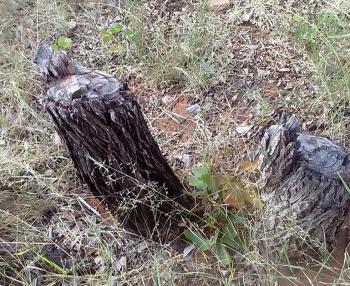 The Mopani tree is in danger of extinction in certain areas as it is carelessly being cut down for firewood.  Photo: Elmon Tshikhudo.