'Our son will still rise up from his grave and return'

Three painful months of waiting have passed for the Mathivha family of Lwamondo Ha Gelebe, who still believe that their departed son will come back to them from the dead.

The 18-year-old Ndamulelo Mathivha died early in March this year after a long illness. His family kept his body at the mortuary for two weeks in the hope that he would come back to life but finally buried him on 26 March.

Before Ndamulelo died, though, he told them of strange things that would happen to him and asked them to exhume his body from the grave as he would not really be dead and gone for good. Following his instructions, the family shocked the community when they dug up their son’s grave shortly after the funeral, believing that they would find him alive. What they did find, however, was a whole different story.

Upon reopening the coffin, which they had dug up from the grave, the family claimed they had found a doll inside, instead of their son. According to them, not even a bad smell was coming from the casket as was to be expected. This was disputed by members of the community, who witnessed the exhumation and saw the boy’s decomposing body inside. The putrefying smells that escaped from the coffin when it was opened alone was proof to them that it contained a decomposing corpse.

The family will not be deterred and still holds firmly onto the notion that Ndamulelo will come back to life. They said they had consulted with prophets and traditional healers who had told them that his body had been taken by evil people and made a zombie, but that he would return from the dead.

The family claim that, of late, Ndamulelo has been causing them sleepless nights as he visits them at night and disappears again before they can hold him.

The deceased boy’s father, Mr Nelson Mathivha, said he spoke to his son last week. “I was in bed at around 20:00 when I heard his voice in the house. I told him to go to his room, with the hope of finding him there. I thought that at last our nightmares were over, but when I went to his room, only the lights were on; the boy was nowhere to be found. We are still consulting those who know, and they are giving us hope that he will finally come back home forever,” he said.

Ndamulelo’s sister, Ms Rudzani Mathivha, said they were praying day and night for his return. “While he died in my hands, he told me he would rise from the dead. Over the last few days, he has been visiting me in my sleep. I see him, but I cannot touch him. With the latest developments, I believe it is just a matter of time before he comes back home for good. I am on my way to a prayer session as we speak, and I believe that God will perform a miracle,” she said. 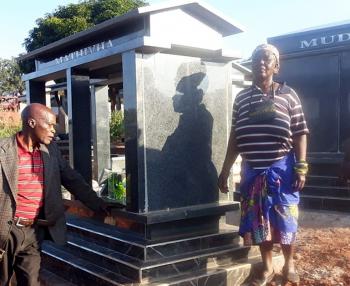